Projects, no matter how big or small, impact the community in positive ways. The Wolf Run Bridge Project is an example of the next-level dedication that New River Electrical has in serving our community.

A Tradition of Service 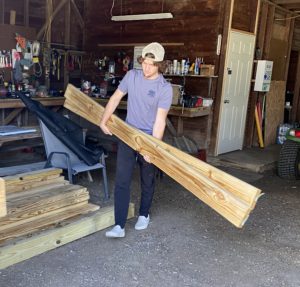 The project was to rebuild a bridge located in Wolf Run Regional Park in Mt. Vernon, Ohio. The bridge, spanning 30 feet, was in a state of disrepair after storms and falling trees had damaged the bridge. Thankfully, seventeen-year-old Eagle Scout Evan Smith, along with his Scoutmaster Clint Lingle, his father Jimmy Smith, and brothers Nate, Kolbe, and Austin, volunteered their time, strength, and effort to repair this vital piece of infrastructure for the park.

This isn’t the first project that the Eagle Scouts have worked on in the Wolf Run Regional Park. In fact, Zach Lacey, Project Manager with New River Electrical, explained that Eagle Scouts had played a large part in the park’s existence over the years. “Eagle Scouts have done quite a few projects out there,” Lacey said. “They helped with the full layout of the park and the trails, and more recently the dog park and garden area.”

Hard Work for the Community

After getting in touch with all of the stakeholders, Evan, his volunteers, and a small crew of New River Electrical employees got started reconstructing the bridge. “This project was done over the course of three days,” Lacey said. “The team worked on two parts of the bridge: one being restoring the area that had been damaged by storms. In addition, the creek that runs under the bridge had undermined the foundation at one end of it. As a result the foundation was dug out and the supports were all reinforced, all new lumber was then laid all across the bridge.”

Even with as many volunteers as Evan had on his team, the work was still labor-intensive. “The group didn’t use any heavy equipment to get this work done, so a lot of sweat and tears went into accomplishing the project,” said Lacey.

Serving the Community with Excellence

“Eagle Scouts approach challenges like we do,” said Lacey. “They know the value of teamwork and all of the work that can be accomplished when you work together.”

“We also have a shared desire to improve our communities and be a support system. At New River Electrical, we’re helping to put in place the system that brings power to the cities that millions of people live in. But we’re committed to doing all of that with excellence and a service-minded mentality. From what I’ve seen in my work with Eagle Scouts, they take a really similar approach in their attitudes towards service.”