The Bellefonte Extension Overhead Line project is a 138kV line rebuild along the Ohio River where Ohio, Kentucky, and West Virginia meet. Extending about 3.6 miles in length, the electrical line crosses state lines from the Buckeye State into the Bluegrass State. The project included some lattice tower demolition of a little over twenty structures, including two that are particularly large at 265 feet tall.

While crossing a river adds its own technical complexities, it meant our teams needed to deal with two different states and their respective regulatory entities. “There were a lot of moving pieces to this project,” says Andrew Rieman, Project Manager in the Overhead Line Division, who has been with New River Electrical for about four years. “Crossing the river also meant we needed to work with the United States Coast Guard and the Army Corps of Engineers. Separately, due to the height of some of the structures, we even had to coordinate with the Federal Aviation Administration, so there were just a lot of pieces we had to pull together to get our work done.”

While none of our work happens without meticulous planning, the Ohio River crossing portion of the Bellefonte Extension project required the utmost attention to make sure we could get the project done safely and without delays.

“That was the most challenging part of the project,” says Rieman who worked with his team and the numerous stakeholders to plan the entire process months in advance. “Thinking through every minute detail is painstaking, but it’s important for making sure that we get our projects done efficiently.”

Even though it’s not easy work, seeing everything come together well is what our work is all about. “Over the course of a month, our teams executed the river crossing plan,” says Rieman. “That’s probably my favorite part of this project, seeing our hard work pay off with everything coming together nicely.”

In order to work on the project safely, we had a no-compromise policy that traffic not be flowing under us while we were working. With busy thoroughfares such as interstate and railroad tracks, this was a challenge. “There were whole days when we weren’t able to do anything, and it would have been easy for our leadership out in the field to try to get some work done,” explains Rieman. “But our field folks wouldn’t compromise because of safety. So even though the project had a longer timeline due to the coordination involved, it was worth it to make sure everyone stayed safe.”

At the end of the day, that’s what New River Electrical’s company leadership comes back to time and time again. “No deadline is ever more important than safely going home,” says Damien Phillips, VP Overhead Line at New River Electrical. “Our Leadership from the top down can preach that until we’re blue in the face, but to have our folks out in the field living out this safety culture is something we’re really proud of.”

A Powerful Commitment to Integrity

Not only are we committed to our crews working safely, but we’re also committed to working respectfully in the communities we serve. A local baseball field was located by the electrical line, and our work coincided with the last two weeks of the baseball season. 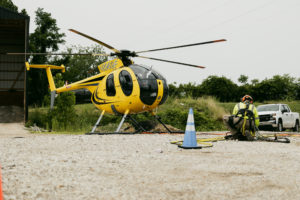 “We had the option to cancel the rest of the baseball season, which would have been easier on us, but that’s not something we wanted to do if we could help it,” says Rieman. The crews made a few logistical changes to ensure our equipment was locked up and out of the way at the end of each day and get our guys to the worksite earlier so they could leave earlier to clear the field for the baseball teams.

“We’re working in people’s backyards but don’t want to interrupt their lives. It was a bit more difficult, in all honesty, but it was something our crews decided was the right thing to do.”

Our company prides itself in these sorts of decisions that show integrity and professionalism, even when it’s inconvenient or more difficult. That’s because we believe in doing the right thing, whether that’s respecting the communities we work in or working with safety as our highest priority. “If you work with integrity, professionalism, and safety as your guiding principles, everything else will fall into place,” says Phillips. 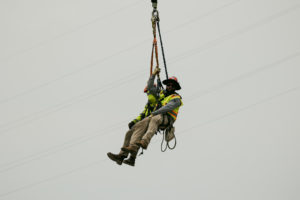