From having ties to New River Electrical to gaining extensive hands-on experience in the field, it’s safe to say that Ryan Tuttle’s roots in the trade run deep.

After Ryan graduated high school, he attended college for a year and a half for Fish and Wildlife Management, which was a fitting field for him. He quit early to work briefly in the farm fertilizer and spraying business. “I was used to working outside and being outside,” Ryan said. Ryan’s stepdad had been working for New River for some time when one day, Ryan got a call from his stepdad that would lead to a turning point in his career; the NRE family was hiring. Ryan was working for a construction company at the time, and his stepdad mentioned there was a fantastic opportunity to work as a groundman at NRE. As Ryan recalled, “I quit and went to work the next week for New River.”

“I learned a lot from Foreman Paul Hardon over the years,” Ryan mentioned. “You could call him my mentor.” When Paul later retired, Ryan was offered his position. Ryan went on to say, “I took the Foreman’s job, went to ALBAT (American Line Builders Joint Apprenticeship & Training), and got my sub tech ticket.” Since day one, Ryan has worked tirelessly in each of his roles at NRE. He worked his way up the ladder and became a Superintendent for the Westerville Substation back in 2012. His knowledge of the field and his time spent interacting with team members each day has given him an edge as a superintendent. Ryan mentions, “I started at the bottom, so I know what the job is like and I believe that helps me in my current role.”

While looking out for the team is a part of Ryan’s duties as Superintendent, he genuinely cares about everybody he works with. When asked about what a typical day working in his position looks like, Ryan mentioned, “Every day is a little different between traveling and problem-solving, I get the phone call when something is wrong.” The project managers, foremen, and general foremen work with Ryan to find the best solution to each problem they encounter. Ryan keeps track of roughly 95 people, “My job is to keep the team where they need to be to get the jobs done on time; and safely, of course.”

Through the years, NRE has evolved and we are lucky to have a whole division dedicated to keeping everyone safe and sound. Ryan noted that he’d seen “a huge shift towards safety over my 26-year career.” Our focus here at New River Electrical is to take care of everybody, period. What we do in this industry is very dangerous, so we’ve devoted much energy toward ensuring each crew member gets home safely every night.

It’s definitely a perk having friendly folks on a team with you. Ryan spoke very fondly of everyone, saying the best part of his job is getting to work with a lot of the team members he knew before he became Superintendent, as well as the new employees. He mentioned, “The people here are everything. I couldn’t ask for a better group of guys that are working for me.”

Reflecting upon the work culture, Ryan shared that there’s been a good group of people at New River ever since he started; they’re “very hard working and dedicated guys, and a lot of them have been with NRE for what seems like forever.” Ryan mentioned how valuable working as a team is, especially in this field. Speaking specifically of his teammates, he said, “They love the opportunity to work together as a team and with new people.”

Ryan stated that New River’s safety-centered culture has made an impact on him both on and off the job. “Typically when I’m at home, I stop and take more time. I pause and look at things a little closer, make sure I have the right tools for the job, and the right equipment a lot more than I used to… We talk a lot about accidents – It gets you thinking about what could happen to you if you’re not paying attention and focused on your job.”

They say home is where the heart is. When Ryan’s not working, he loves spending time with his family on their property. He recently bought a house on 64 acres of land – perfect for farming and hunting. A while ago, Ryan got into golfing, which he says is now his favorite hobby. On weekends, you might find him unwinding in his garage, practicing his swing with his golf simulator.

We are so lucky to have Ryan on the New River team. He is such a caring, diligent employee-owner; he’s raised the bar high as a crewmember, and now as Superintendent. 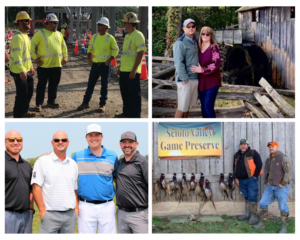